Take Time for Yourself

For the past couple of weeks, I have been participating in a daily Twitter challenge run by a good PLN friend, Ben Dickson of Reno, NV.  Each day has a different idea, ranging from sharing ideas on activities that are done in the classroom, sharing student work, and people that you network with over Twitter or other means.  One of the most striking to me thus far was the following question: 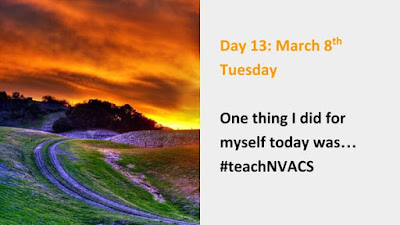 At the time in which I responded to the question, my instant thought was how I was going to go home after work and watch Monday night's episode of Better Call Saul (which is starting to get really intense by the way) and catch up on a couple of last week's episode of The Late Show with Stephen Colbert.  When I got home, I realized that the Red Wings were playing, so I decided to watch that instead.  I still watched Better Call Saul, but I never got around to watching any Colbert.  I also spent some time with my wife and our two young kids.  Overall, it was several hours of relaxation (for the most part, a 4 year old that thinks she is 17 and a 10 month old getting ready to walk is far from relaxation at times).  Bottomline, I didn't think about work from the time I got home around 4 and when I went to bed around 9.

If you are an educator, regardless of the position in which you hold, it is a stressful job.  If you do not take time for yourself and purposely fit it into your life, you will be more stressed and ultimately lose your mind.  It is imperative that you find something in order to get away!  Yesterday was all about TV for me, which was fine.  However, there are other things I do to get away from work.  While I haven't been able to play as much lately, I like to get out on a sheet of ice and play hockey.  Thursday nights are my league night (which is also my leadership academy night, so I am on league hiatus until early May) and there are pick-up games on Fridays, Saturdays, and Sundays that I like to jump into at least once a week.  I will be running another half marathon at the end of the month, so I have been getting out and pounding the sneakers in training for that (been a few days, resting a sore knee, no use in hurting myself before the race!).  I love to hike, and on Sunday, my wife and a group of my Team Red, White & Blue friends hiked up most of Frenchman Mountain, a significant peak on the east side of the Las Vegas Valley, starting at around 2000 feet and climbing up about 1300 feet over 1.5 miles before we turned around.  We didn't make it all the way to the top (another 1000 feet up over another mile or so), but we are going to tackle that later.  Then there is my family, hanging out with my wife and kids.  Fishing and camping are another go to for me, but those take a little more planning and time, as fishing isn't exactly a hotbed in Las Vegas; it requires a bit of driving to find the good fishing spots.

What do you do relieve stress and get away from it all, even if only for a few minutes?  If you aren't making time for yourself, why not?  Become a better educator; spend some time on yourself! 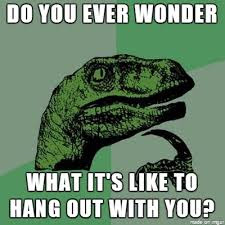