Each year, ramping up in December and into January, social media is flooded with posts, videos, blogs, etc. proclaiming individuals' one word for the upcoming year. In most years, the exception being 2020, I have also participated in the #OneWord movement. After not choosing a word in 2020, I returned this year, choosing commit as my word to 2021.  Throughout the year, I like to revisit my word and evaluate if the word is still resonating, have I been living up to my choice, and propose and adopt any changes if I need to do so.

In my original post for #OneWord2021 when selecting commit, I identified some areas in which to firmly commit in 2021 to improve myself as a person and as a professional educator.  Briefly, those areas included committing to exercise, eating better, becoming better informed about issues of equality and equity, becoming a Google Certified Innovator, and overall, just being the best educator that I could be regardless of the model of instruction in which I was teaching. 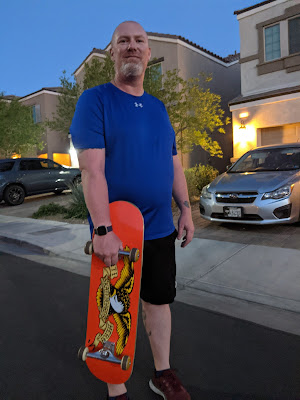 As of January when I wrote my original post, I had exercised outside for 43 days in a row. My preferred activity is a walk, usually about 3-4 miles, sometimes further.  Since that writing and as of this writing, my streak is up to 156 days in a row and I have incorporated some additional activities in my days besides walking.  Since the beginning of my streak, I purchased a Peloton bike, and with the exception of 3 days during my spring break, I have completed some sort of activity on the bike or on the app (Peloton isn't just a bike, the app has a variety of walking, running, yoga, cardio, boot camp, and meditation activities as well).  I have started playing hockey again, joining a great group of men and women that play to have fun in a competitive league on Sunday nights on occasion (games are very late on many Sundays, so I don't play every week).  I even bought a skateboard and have been learning how to ride it along with my son who has been wanting to learn himself; my decision to learn to skateboard was my way of spending time with him as he learned to ride.  (I get that at the age of 39, the risks of getting hurt and the time for recovery are higher than if I would have learned as a teenager, but my go-to answer? I wrote a book about risk-taking, so I'm just modeling my own words!) I am able to move around, turn, and balance on the board with relative ease and I am starting to try some basic tricks like an ollie, but I am not expecting to be Tony Hawk anytime soon, so I am most definitely taking my time. 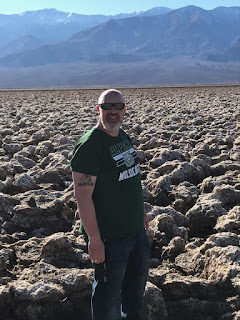 On January 4, I started actively monitoring my food intake, food choices, and tracking those through Noom.  In addition to helping me track what I am eating and the choices I make, Noom also has lessons built into the program to help me make better decisions, cope with emotions and food (I am definitely an emotional eater, regardless of the emotion), and learn what they call Psych Tricks to help make a healthy diet and lifestyle a part of me and not just a fad diet.  While I still have days where I slip up and make poor decisions, I feel that Noom has helped me become more aware.  I was a Weight Watchers member in the past and while Weight Watchers worked for me at the time, the daily lessons from Noom have helped me to be better committed than the weekly meetings and weigh-ins with WW.  That said, between my commitment to exercise and eating better, I am down over 30 pounds from the beginning of the year.  I still have more weight that I want to lose, but I have more energy, I feel better, and I am definitely seeing results.  Weight isn't coming off as fast as others that are similarly committing to weight loss, but non-scale victories like clothes that fit better are common for me.  Just comparing the two pictures here from late January to mid-April, I can see it in my face and my body.  In addition, I purchased a FitBit smartwatch to help me track steps, exercise, heartrate, sleep, and much more, plus get into some friendly competitions with those that I have connected with on the FitBit app.
While I have concrete evidence of my commitment to exercise, a healthy diet, and weight loss, evidence of learning more about equality and equity is not as visible.  However, reading, having conversations, and most importantly, listening, have been part of my routine to be a better ally.  I paid close attention to the Derek Chauvin trial and was relieved when a jury found him guilty on all counts in the murder of George Floyd.  And while many proclaimed that justice was served, to me it was more accountability than justice because justice would bring George Floyd back.  And the fight for equality is not over, the verdict is only the start and there is so much work to be done.  And proof of that is in the comment threads on social media and news websites regarding the verdict and the outright hatred and bigotry in those comments, not to mention other incidents that have occurred since George Floyd's murder and even during the time of the trial.  My commitment is to continue to learn, be informed, and listen to help make the world a better place for people of color and end discrimination and bigotry once and for all.
In the summer of 2020, I submitted a project of the virtual Google Certified Innovator academy but unfortunately, I was not selected.  For 2021, I am hoping to submit again and learn from incredible innovators around the world to help me improve education in my community.  As of this writing, the Innovator cohorts for 2021 have not been announced.  One can assume that they will be virtual again, but perhaps they have not been announced because they are trying to gauge whether an in-person academy can be held later in 2021.  Either way, I am looking forward to the opportunity to try again.
Lastly, I wanted to commit myself to be the best educator that I could be regardless of the mode of education.  Throughout 2020 and into 2021, my school and district were in full-time distance education.  As things improved, elementary-aged students returned to hybrid instruction in February and eventually were given the choice to return to full-time in-person instruction in early April (my own kids returned to much excitement, especially my son who had never experienced in-person school).  Middle and high school was a little different, with a hybrid schedule proposed but most students remaining in distance education.  I returned in mid-March to work from school and shortly thereafter, having a handful of students in class.  Again, most are still online, so, unfortunately, not much has changed in regards to how lessons are taught.  But for that handful of students that are in person?  It has been game-changing for them!  Students that I rarely interacted with or received any work from are now doing much better just because they are back in person and I can interact with them.  I can better gauge their emotional wellbeing in person and I can have deeper conversations with them about a variety of topics.  While it is still not the "normal" that we knew prior to March 2020, it's a start, and barring any major setbacks, I look forward to full in-person school in August.
Commit has been a great #OneWord for me thus far.  I look forward to continuing the journey across the board for the remainder of the year. If you chose a word for the year, take a moment to reflect back on it and see if you are still connected to your word of choice and if not, how can you reconnect or even choose another word.
Until next time...