As an educator, technology is a big part of my life (if you have ever read any of my posts or followed anything I have ever posted to Twitter, this should not come as a surprise).  What may be surprising is that as "addicted" to technology that I am, I love to get away from it for extended periods of time.  For the past month, my access to Internet connections, and quite honestly, my desire to get online, has been severely compromised, and I am 100% fine with that.  Summer vacation for a teacher is supposed to be relaxing, a time to recharge, but also a time evaluate the past year and to learn some new things in preparation for next year.  So far, my summer has been both, but definitely more on the side of relaxation.

As I write this, I am still on vacation.  I haven't seen my house in over a month.  I have been living out of a suitcase; I have been doing laundry either at a friend or family member's place along the way or at a campground laundromat.  The camper has been working out nicely thus far; a pop-up is a perfect size for a family of four that still wants it to be camping, not like many that are essentially a hotel room on wheels. 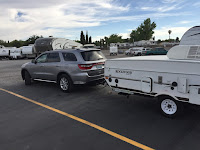 So I have been gone a month, where have I been?  As of this writing, my family and I have put nearly 7,000 miles on the vehicle, all while towing the camper (doesn't that cost a lot in gas? Not as much as I thought, I am still averaging 19 mpg pulling the trailer, very pleasant surprise!).  We started out in Las Vegas on June 9th.  The goal was to avoid driving more than 8 hours in a day with the kids.  More driving than that would be terrible for a 4-year-old and a 14-month-old.  We also agreed that numerous stops each day would be best.  But as a planner, I also wanted to be sure we had campsites each night, so we planned ahead of time where we wanted to get to so we could book campsites.  Some nights along the way would not be in the camper, as we have family in many places throughout the nation.  The following is a breakdown of where we went, how long we stayed, etc.:

Grand Junction, CO (1 night): quick stay at my wife's cousins' house after about 7 hours of driving

Golden, CO (1 night): a short jaunt to outside of Denver so we could see an old college friend that we hadn't seen in a long time

Independence, MO (2 nights):  the most terrible day of driving of the entire trip.  Driving straight through from Denver to Kansas City is over hours on a good day, which turned into nearly 13 with stops.  However, there isn't much to stop for in Kansas (if you are from KS, I am not knocking your state, but there are times that I wonder if the state was going to end) and we wanted to get to MO to see some family.  We stayed two days so we could spend some extra time with them.

Des Moines, IA (1 night): Drove about 3 hours so we could see one of my college roommates and camp out with her.  She took us to the Iowa Capitol Building, quite a beautiful place, and a craft beer bar & grill called El Bait Shop (I needed a week at that place to try different beers).

Green Bay, WI (1 night):  The plan for months was to meet up with a college teammate of mine and his family to camp for a long weekend.  We drove to Green Bay and stayed a night with his family to prepare for the weekend.

Iron Mountain, MI (4 nights):  Mary's hometown.  We camped all four nights, three of which were with my teammate Marshall and his family.  We were able to visit with Mary's family and several of our friends from college while in town.  I took my daughter Elsa fishing for the first time, but she wasn't able to hook anything.  I caught a beautiful smallmouth while tossing a sinking Rapala near a dam on the Menominee River.  My son Reed was with me for that one and since he is all boy, he oohed and ahhed at the fish and poked at it.  The kids got to experience their first real camping with campfires, s'mores, bug spray, and limited access to showers and a long walk to the bathrooms.  They also got to meet some of their family that they had never met before and Mary and I got to see some that we hadn't seen since our wedding 8 years ago.

Marquette, MI (1 night):  Home of Northern Michigan University, the city where I lived for 5 years while going to school and playing football, and where I met my wife.  We were amazed at how much the city and campus had changed in five years since we had last been there.  We experienced two of our favorite restaurants from our time in college, checked out the two new breweries in town, and took our kids to see campus and Presque Isle Park, showing my four-year-old Black Rocks, where we used to jump off the cliffs into the frigid waters of Lake Superior.

Alpena, MI (3 nights):  My hometown.  Along the way, we stopped in St. Ignace, MI to climb Castle Rock, an amazing viewpoint that overlooks the Straits of Mackinac and the surrounding area, and Cheboygan, MI, where we visited an old friend from college and had dinner with him.  In Alpena, we stayed with my 92-year-old Grandpa.  He had never met our son and he was pretty excited to hang out with both kids.  We got to see many of my old friends and family that I hadn't seen in years and we took the kids to visit my grandmother and brother at the cemetery (can't believe that Grandma has been gone for 14 years and my brother for 6 years; they are buried next to each other, with the agreement from my Grandpa that Cody knows he is moving over a bit when he is ready, my Grandpa is hilarious!).

Detroit, MI (3 nights):  We can't go to Michigan and not catch one of our favorite teams while we are there.  We caught two Tigers games, saw some family and friends (one of which I hadn't seen in 14 years), my brother from another mother Brandon and his wife, my sister from another mister Lorrin, and went to The Henry Ford in Dearborn (if you have the chance to see this place, plan on a few days rather than a few hours, I got to see maybe 20% of the grounds, and it was AMAZING).

Roscoe, IL (1 night):  Essentially, this was a stop after about 6 hours of driving.  It was planned because another teammate of mine and his wife, good friends of my wife and I for a long time, live there.  Both are educators, with Mike an elementary principal and Heather a PE teacher.  We camped at Rock Cut State Park, met their kids for the first time, and caught up like it was old times.

Sioux Falls, SD (1 night):  Again, another night after 7 hours of driving.  We stayed at Yogi Bear Jellystone Park, giving the kids the opportunity to do some fun stuff like swim while we were there for the limited time.  It was more of a night of rest and laundry before the fun of the next three days... 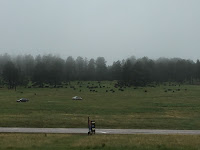 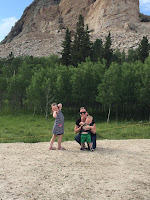 Custer, SD (3 nights):  Quite possibly my favorite part of the trip.  Custer is in the middle of the Black Hills, a few miles from some of the most amazing places in the nation, such as Mount Rushmore, Crazy Horse, Jewel Cave, Wind Cave, Custer State Park, and many others.  The weather wasn't the greatest when we were there, but it didn't stop us from seeing all of the marvels of the Black Hills and hear some amazing stories from a park ranger named Darrell Red Cloud.  We hiked along the base of Mount Rushmore, watched the laser light show at Crazy Horse, saw tons of wildlife in Custer State Park, experienced Deadwood (which I was disappointed with, but maybe I was unfairly comparing it to Virginia City, NV, which I find more appealing because it is not nearly as modernized as Deadwood), visited Firehouse Brewing Company in Rapid City (Mary and I went there on our drive to Michigan in the days leading up to our wedding 8 years prior, made for a bit of reminiscing while we were there), and, completely randomly, ran into some friends of ours from Las Vegas at Mount Rushmore when we returned to see the lighting ceremony.

Wendover, UT (1 night):  Originally, the plan was to drive into Wyoming a few hours, then to Nevada, before getting to my parents' place in Northern California.  However, my cousins that work as rangers in Yosemite National Park were also at my parents and wanted to see us.  We made the decision to cut down the driving to two days from three to get there to see my cousins.  It was going to be 20 hours of driving (without stops) over two days, with two young kids.  While both of my kids were great over about 14 hours on Saturday from Custer to Wendover, I certainly do not recommend it at all.  I was exhausted and fell asleep within minutes, only to be woken up a couple of hours later when some late night revelers mistakenly thought that our hotel room was theirs and woke me up trying to get their key to work in our door.  On Sunday, we finally got to my parents' place after 8 hours of driving across Northern Nevada and Northern California.

We have about a week of vacation left.  We will spend a few more days at my parents before we head to Reno for a few days.  There, we will take the train from Carson City to Virginia City for a day, head up to Lake Tahoe for a day, and who knows what else.  We will finally make it home on July 17th.  On July 18th, I will begin my summer of learning and preparation for this coming school year.  My new position of technology coordinator is going to require some extra work going into the school year, work that will begin with a meeting with my new principal right after I get back, planning a professional development training on Google Classroom for the staff of my new school, and working out after school trainings for the staff in the first few weeks of the new school year.

My summer has been amazing thus far, but I am looking forward to returning home, getting back into a routine, eating better, and working out again (I miss running and playing hockey, but in fairness, my knee was banged up too).

Until next time... say hello to my new little friend from South Dakota! 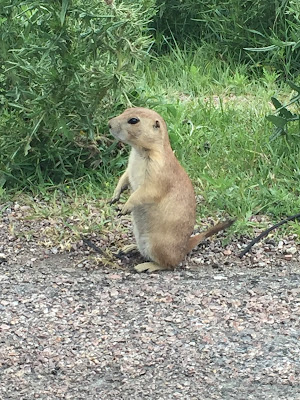