Today was the first day of summer vacation.  The school year is long and grueling, which is enough to want/need a few weeks off.  This past week with all of the twists and turns of the proverbial roller coaster, from having a job, to not having a job, to having a job that has the potential for being even better than what I had lined up before provided even more reason to be ready for some time off.  However, there ain't no rest for the wicked, money don't grow on trees (sorry, couldn't resist throwing in the Cage the Elephant reference, see clip below).


Today, I attended and presented at the first ever Las Vegas iPadEDU Summit, hosted by EdTech Team.  The summit, which was geared toward educational tools used specifically on iPads, featured a keynote speaker (Tanya Avrith) and numerous sessions on various tools.  To say it was a great day is an understatement.  Here are a few of my favorite takeaways from today's sessions.

First of all, I was absolutely amazed by the number of people that came to the summit.  Based on rough numbers that I heard throughout the day, there were over 200 people that paid a large chunk of change to come to a conference the day after school let out for the summer.  One such person that attended didn't get their ticket until after 11 PM the night before.  That to me is one of the greatest displays of dedication that I have ever seen.  I wonder how many people in other professions would take the first day of their vacation to attend professional development...

My absolute favorite app of the day is something that I had vaguely heard of prior to the summit.  Canva is an amazing visual design app.  There are tons of different formats, from invitations, posters, magazine covers, and business cards with text, photo, drawing, shape, and other tools to modify images.  It is a free app that is also available through a web browser on devices other than an iPad.  During the session, we were given time to start playing around with its features, so naturally, with my new job, I started to design a business card.  I got a rough one together during the session and finished it up when I got home later after the US' loss to Columbia (tough first match in the Copa America).  This is what I came up with: 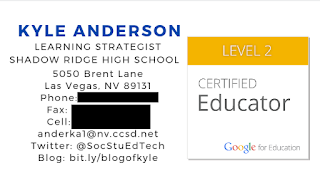 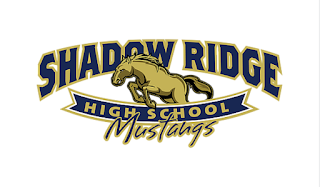 Another tool that I found quite rad is Seesaw.  Seesaw is a tool that allows for classes to share different forms of work on a "public" platform.  The format of the tool looks a lot like social media, even allowing for others to like and comment on work that is posted.  You can post text, pictures, video, audio, drawings, and so much more.  You can also sort the work that is posted by who posted it and assign work to folders that are aligned with people in the class.  Ben Friesen, the summit host, encouraged people to use Seesaw in addition to Twitter throughout the day to encourage collaboration, learning, and displaying said collaboration and learning.  This is definitely a tool that I can see being very effective in all grades levels and subjects.

My last takeaway from today is something that I didn't necessarily see in action today, but I learned something about in passing.  There are tons of video creation apps out there, some of which are paid, some of which are free, some of which are better than others.  One of the better free video production apps available in the past was Adobe Voice.  Voice allows you to create short videos using pictures, audio, text, and animation effects.  Since I got a new iPad Mini 4 this week, I have been trying to download all sorts of apps to play around with (especially because it is 128 GB).  When looking for all of the Adobe apps that are available, such as Fill & Sign, Photoshop, Clip, and others, I could not find Adobe Voice.  The closest that I could find in the App Store was Adobe Spark.  After talking to an Adobe Educator, I was informed that Adobe Voice became Adobe Spark a couple of weeks ago.  I have yet to play around with it, but I assume that it is just as great, if not better than Voice was before (why would they change the name of it if they weren't planning on making it better, right?).

The iPadEDU Summit was one of the best training days that I have been to in a long time.  It was very well organized, the keynote speech highlighted some very important points on digital citizenship, there were several different session in which to choose from, and of course, there was the networking aspect.  I always love seeing my professional friends acquaintances and meeting new people in which to inspire and to draw inspiration.  I sincerely hope that EdTech Team comes back to Las Vegas with another iPad Summit in the future.

In the meantime, I am looking forward to several things.  I will be making the transition to my new job in the next few days by meeting with various people from my new school.  I am still in the process of planning out various steps of the conference set for September 30 and October 1.  I will be making my way to Long Beach at the end of July for CUE's leadership conference.  I am hoping to attend a GAFE Summit in Southern California (I applied for the Pear Deck Certified Coach program and if I get in, I need to present Pear Deck at a summit; I selected Orange County and San Bernardino as my top choices for the presentation).  I am also going to be presenting at the GAFE Summit in Las Vegas on September 3 & 4.  All that will be preceded by my cross-country camping trip from Nevada to Michigan, from Michigan to California, and back to Nevada.

If you were at the iPad Summit, what were some of your favorite takeaways?