In early 2015, I attended an educational technology conference in Las Vegas at a school not far from where I was teaching at the time.  It was a great opportunity to learn about some new educational tools and how to use them and also to network with some educators that I didn't get to see and/or talk to very often.  What I didn't realize going in was that something was going to happen at this conference that was going to change my life.

At one point during the lead up to a keynote, the person speaking asked how many people in the room were on Twitter.  Of the 200+ people in the room, I was one of maybe 3(!) that did not raise my hand.  At this point in my life, I was still under the impression that Twitter was for celebrity gossip and feuding with people, something that I saw enough of on Facebook.  What I did not realize was how powerful a tool for professional development that Twitter was, but even with all of those people as proof of its power, I still did not sign up; I needed something else to convince me, convincing from a trusted source.

A couple of days after the conference, I spoke with a colleague that I saw at the event.  He was one of those that raised his hand stating that he had a Twitter account and I knew that he would be a great source of information and would be able to give it to me straight.  After a conversation with him, I decided that I would give Twitter a try and if I didn't like it, I could always deactivate the account.  It was certainly a 180 since I was one that had sworn that I would never create a Twitter account, I would never use hashtags, and I had enough going on with a Facebook account.  And if you are interested in finding your first tweet, I found a tutorial on a blog that walks you through the whole process, step-by-step.  Check out this post from Technology Hint at https://www.technologyhint.com/find-first-tweet/.

Since taking the plunge back in February 2015, I have followed over 1600 people, I am followed by over 2900 people, and I have tweeted over 10,000 times.  And with the exception of a few tweets to a few sports teams, such as the Detroit Tigers, Detroit Red Wings, and Vegas Golden Knights, a comedy podcast called Taggart & Torrens that I listen to, and a rant a few years ago during the Super Bowl about how I felt the NFL had become a joke and Roger Goodell is mostly to blame (I still feel that way, to the point that I don't watch the NFL at all anymore, let the players play, hit one another, and let defenses play defense rather than trying to make it easier for offenses to score points and up the "entertainment" factor for the casual fans), I have kept it professional in the name of interacting with great educators and students, sharing my expertise, learning, blog, and podcasts, and building relationships with people in a virtual environment.

Over the course of the past few years, I have developed a strong online presence, one that includes a Twitter account, this blog, and more recently, the start of The BeerEDU Podcast with Ben Dickson, the AndersonEdTech Vlog on YouTube, and the Sons of Technology Podcast, the brainchild of Joe Marquez, a fantastic educator and human from Clovis, CA.  I can honestly attribute everything to taking that leap and creating my Twitter account.

I cannot even begin to identify all of the people that I have met over the years that started as a follow on Twitter.  The follows became reading tweets, blogs, listening to podcasts, watching videos, and so much more.  Profile pictures put a face to all of the great information that I was getting from Twitter.  Then came the real-life interactions.  I started to meet many of those that I followed on Twitter at conferences, at workshops, and at leadership institutes.  The "awkward" meetings with people did not exist because it seemed as if we had already known each other for years and rather than handshakes, many first meetings have resulted in hugs instead!

My podcast partner, Ben, is a great friend of mine now.  He and I met on Twitter a few years ago, interacting over Twitter chats and our mutual passion for improving education in the State of Nevada.  Because I traveled to Reno from Las Vegas several times a year, it was easy for us to finally meet in person after interacting with him online and through Voxer for a year or so.  When the idea of The BeerEDU Podcast was born, I still lived in Las Vegas and the idea was that we were going to record remotely over the 430-mile difference.  However, it was made easier when I made the move from Las Vegas to Reno, now we can record in person and interact on a level much higher than a Twitter account.  You can find our podcast on Anchor, Apple Podcasts, Spotify, and anywhere else you listen to podcasts!

I must say that a podcast most likely would have never been on my plate had it not been for Twitter.  Prior to Twitter, I knew what a podcast was, but I didn't know anything about how to go about listening to one, which ones I should listen to, or especially, how to create and publish one myself.  My earliest memory of a podcast was after the CUE-NV State Conference that we hosted in January 2016.  Our keynote speaker for that event was Brian Briggs and he talked a little bit about his show, Check This Out, that he hosts with Ryan O'Donnell.  After the conference, he published an episode that reviewed his time at the conference and from that point forward, I became a subscriber/fan/inquisitive mind that every now and then, I could contact Brian and Ryan about things on the show.  Over the course of several months, I can across other shows as well, many by people that I already followed on Twitter, people like Tom Covington, Michael Jephcott, John Eick, Ben Cogswell, and many others. 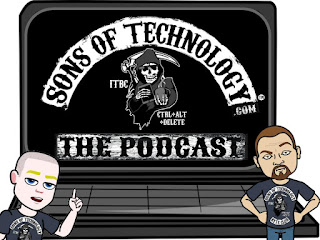 Joe Marquez was another one that met through Twitter.  Between his personal/professional account, @JoeMarquez70, and his brand, Sons of Technology, @SonsofTechEDU.  Over the course of a couple of years of admiration from afar and interaction, I met Joe for the first time in person at the Tech Rodeo in Visalia, CA in January 2018.  Over the next few months, we interacted more online and saw each other at a few events, trading various ideas, debating others, and a lot more.  When the opportunity to present at the Tech Rodeo in 2019 presented itself, I contacted Joe and asked him if he'd be interested in a collaboration presentation where we would plan remotely and present together in person.  Not only was he interested, but once we started throwing out some ideas on the focus of our presentation, an idea for the Sons of Technology podcast was born.

Joe has used his Sons of Technology brand for many years, just like AndersonEdTech has been mine.  His idea was to expand his brand by presenting an audience with topics where he and another host could civilly debate the merits of a topic.  While planning our session, he asked me to be his co-host and how we should record an episode as part of a session on building a brand.  At this time, we are two episodes deep into the journey, with the podcast available on most platforms, including Anchor, Spotify, Google Podcasts, and many more (we are still waiting for approval from Apple Podcasts as of this writing).

I have Twitter to thank for the learning, the connections, and the endeavors in which I have made over the past few years.  Every time I meet an educator that has not jumped into the Twitterverse, I take a moment to explain what it has done for me and, like we like to say on The Sons of Technology Podcast, to take a risk and ditch their fear, if that is what is holding them back.  As always, thank you for reading my blog, and please check out both of the podcasts that I have the pleasure of creating with friends, and also check out my video blog on my YouTube channel.