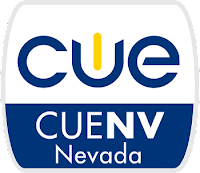 This past weekend, CUE-NV hosted our State Technology Conference at Western High School in Las Vegas.  Months and months of planning went into making the conference a success, with several people putting in countless hours of work recruiting presenters/topics, vendors, preparing a budget, organizing sessions, ordering food and supplies, and advertising what we were planning to be a can't miss conference.  Overall, after a couple of days of decompressing and not having to think about the planning phases any more, I was able to take some time and evaluate the conference, celebrate what went well, think about what we could do better, and begin the planning stage of next year's conference (which, by the way, is already set for September 29-30, register now for a super early bird rate of $69, which includes a CUE membership, breakfast, and lunch).  On the whole, I couldn't be happier with how well the conference went, I met some amazing people and learned some things that I can take back to my job and my position as vice president of CUE-NV.

The conference consisted of two keynote speakers, an opening, and a closing.  Sarah Thomas (@sarahdateechur) opened the conference on Friday evening, motivating attendees and starting the learning fire that would be the next 36 hours.  Dozens of sessions on a wide range of educational topics ensued, with two hour-long sessions on Friday night and five throughout the day on Saturday.  Attendees were treated to breakfast before the Saturday festivities and a great lunch that was sponsored by Lexia (@LexiaLearning). A technology slam took place during lunch where seven educators presented various techy programs or apps, with the audience judging the winner (yours truly won the Tech Slam with a rousing presentation of Timesify... if you haven't heard of it, I highly suggest you do a quick Google search!).  Between sessions and during lunch, attendees were able to learn about some of the latest and greatest in the world of education from 14 vendors that took time out of their busy schedules to come to Las Vegas and promote their products.  Justin Schleider (@SchleiderJustin) wrapped up the learning on Saturday afternoon with a very inspiring closing keynote that highlighted the importance of being critical consumers of information.  Finally, my partner in crime, CUE-NV President Heidi Carr (@carr_8) and I wrapped things up with some information about future events and a giveaway of some awesome prizes like t-shirts, licenses for products like Pear Deck, SnagIt, and Camtasia, registrations to future CUE-NV events and the CUE National conference, and two Chromebooks.

We also had a surprise visitor show up to the conference on Saturday afternoon.  Amanda Haughs (@MsHaughs), a PLN colleague in which I had interacted on several occasions via #tosachat, messaged the #tosachat Voxer group to announce that she was going to be in Las Vegas for the weekend and wondered if it would be possible to crash the party.  Snehal Bhakta (@Snehalstocks) picked Amanda up at her hotel and brought her over to say hello and mingle with presenters and attendees.  She even stepped up and fired out a Tech Slam presentation.