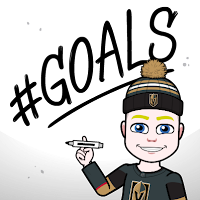 If you have a social media presence, you probably saw the #oneword campaign a couple of months ago, people choosing one word to describe a change or a goal for the upcoming year.  Like many people, I settled on one word for myself, but beyond a Twitter chat in January, I didn't get too wild and crazy with it on social media, no reason in particular.  I focused more my goals for 2018, which I outlined in a previous blog post.  However, it's not like my one word isn't related to my goals for 2018; in fact, my one word, which is actually two words, fully and completely, will guide the steps I need to achieve my goals.

My one word came about months before the new year began.  It started with the death of Gord Downie on October 17, 2017.  Gord was the lead singer of The Tragically Hip, a band that never got much traction or attention in the United States, but is the unofficial band of Canada.  While not a lifelong fan of The Hip as they are more often referred to as I really started to get into them over the past few years.  Gord lost his battle with brain cancer in October, devastating a nation and a fanbase.  Even though he had announced his battle months prior, it didn't make the news of his death any easier, to the point that Prime Minister Justin Trudeau broke down in tears during a press conference announcing that Gord had passed.

In the months since I have been listening to a lot of The Hip.  Gord as a songwriter had a beautifully cryptic style of writing that was wide open to interpretation often times.  Other times, the lyrics were dead set on something specific, such as the song 38 Years Old, a song about a prison break in Kingston, ON back in the 1970s (some of the lines are true to detail, other aspects are fabricated to make a great song).  One of the songs that really stood out to me over these months was Fully Completely.  Now, I am not the greatest at interpretations of art, poetry, songs, so on and so on.  When I listen to Fully Completely, my interpretation of the song is that it is the ending of a relationship, especially lines like, "Lover, she simply slammed the door" and "You're gonna miss me, wait and you'll see, fully and completely."  I could also see an interpretation of somebody trying to kick a drug habit as well.  Again, I'm not great at interpretations, but often times, things are purposely ambiguous for multiple interpretations and only the artist can explain the true meaning(s) intended.

So, how do I take a song about the ending of a relationship and relate that what I want to achieve as a person in 2018?  To me, Fully Completely is a perfect description of how one should approach everything that they do in their life.  One should fully and completely approach relationships, work, play, etc. with a sense of purpose, an idea of an endgame, and take the steps necessary to achieve.  One should never "take a day off" when it comes to achieving their goals, all things should go toward a goal.  That doesn't mean work all day every day and never play, quite the contrary.  You NEED to get away from work stuff and do things that you enjoy, in fact, I believe that play and leisure will help one achieve a goal more effectively.

I want to take a moment to thank Ben Dickson and Sara Holm for my blog idea this week.  Ben and Sara moderate the #teachnvchat on Thursdays at 7:30 PM Pacific and originally focused on #oneword2018 a few weeks ago.  This past Thursday, we revisited our one words and had one of the best #teachnvchat sessions that we have had in a while (nothing against previous chats by any means, this one was just energetic and inspiring beyond belief).  Without their idea to revisit, I would not have been inspired to write this particular post.

What is your #oneword2018?  Think about it and share it with the world!