The Crazy That Is #CUE17

The past few weeks have been absolute insanity with the new job.  I am learning a ton, basically via trial by fire.  However, I am thoroughly enjoying my new role as a dean of students, and middle school kids are a lot of fun.  The craziness continued in a different fashion through the CUE Conference in Palm Springs.  Three days of keynotes, sessions, meeting new people and seeing friends are a great way to spend a weekend!

The insanity started off on the wrong foot on Wednesday night.  Before I could leave town, I had a function at school that required me to stick around for a little while before I could hit the road.  The drive from Las Vegas to Palm Springs is only about 4 hours, so I wasn't too worried about the drive getting me to the hotel late (that's what 5 Hour Energy is for!).  The problem was arriving at my hotel to find out that they had canceled my reservation without telling me!  I had booked my room at the Motel 6 in Palm Springs several months ago, using a credit card that in the time since had expired.  The front desk attendant informed me that they had tried to run my card a few hours prior and it had declined (naturally, it had expired), so they released my room and did not have any left.  No phone call, no email notification, nothing to tune me into the problem.  I was too dumbfounded to be angry at the time.  The chances of a room at nearly midnight in Palm Springs the week of CUE and a major tennis tournament were slim to none.  Luckily, my good friend and CUE-NV partner in crime, Heidi Carr, was awake when I called her to vent my frustrations and offered the extra bed in her room for the next few nights.  All was good, but Motel 6 will be getting a stern telephone call from me after this weekend.

For the most part, I went to a ton of great sessions over the course of the three days.  As a newly appointed administrator, I wanted/needed to get to more administrator-geared sessions, but at the same time, I still wanted to get to some sessions that focused on teaching still.  One such session that I wanted to get to was one on hyperdocs.  I have tried to go to hyperdocs sessions in the past at various functions, but the sessions have not been very good, or in one case, I had to leave in the middle of the session and missed just about everything.  The fifth time was the charm; I got some great ideas and examples on hyperdocs that I am able to use and share.  My friend Heidi Carr and I put together a document of resources from the various sessions that we went to during our time, you can view and peruse what we saw here.

I also got to see the man, the myth, and the legend George Couros, author of The Innovator's Mindset, keynote day two of the event.  George's keynote hit a lot of the items that he covers in his book, shared his story of growing up in Canada to Greek immigrants, and how what you do makes you what you are.  I also got the chance to meet him after the keynote and speak with him for a brief moment.  However, the highlight was when he came to the CUE Karaoke session on Friday night and I got to talk to him for more of an extended period of time.  Our conversation was more about hockey than it was education, and at one point he even told me that I sounded like I knew more about Canada than he did (I grew up a couple of hours from the border, had CBC in my channel lineup for many years, and pay close attention to hockey, so I do have a bit of knowledge on Canadian culture, history, etc.).  I mentioned to him that I would love to have him come to Las Vegas to do an event with CUE-NV, so I am REALLY hoping that CUE-NV can pull that off!

One of the greatest highlights of the weekend that was not related to the conference itself was getting to hang out with great people, some of whom I had met before, others I was meeting for the first time.  On Friday morning of the conference, a group of about 25 people met to hike up one of the mountains near the convention center.  Hans Tullman, a great dude that works out of Bakersfield, CA, led the organization and execution of #CUEHike17.  We hiked a total of about 2 miles roundtrip and climbed an elevation of over 600 feet over the course of the hike.  Before it was even finished, we started talking about the hike at CUE in 2018.


By Saturday morning, the brain drain (the good kind) had definitely set in.  I enjoyed a nice breakfast at a place called Pinnochio's (check it out if you're ever in Palm Springs) and went to the convention center to see some of the student projects that were on display and attend one last session.  After the session, I decided that I would hit the road rather than going to the closing keynote (from what I have heard, that was a bad choice; the final keynote was quite amazing, or so I'm told).  I knew the drive home was going to be tedious from the lack of sleep, the pile of messages that piled up on Voxer, the podcasts that updated, and the sheer amount of new things that I learned.  After catching up on Voxer and listening to a podcast, I decided to listen to a couple albums that I hadn't listened to in a while, Stonesour's House of Gold & Bones Part 1 and Audio Secrecy (with the song Zzyzx Road by Stonesour thrown in for good measure) and take in the scenery of the beautiful Mojave Preserve.  A good choice, because the view area between Amboy (on historic Route 66) and Kelso Depot was a great stop off to stretch the legs and snap a few photos.  Had I not been so excited to get home to see my family and it wasn't 90 degrees, I may have gone for a bit of a hike!  Just up the road are the Kelso Dunes; I didn't stop for photos there, but that's another stop I need to do in the near future! 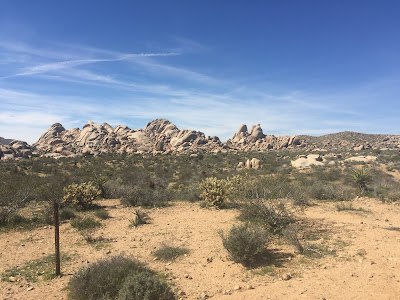 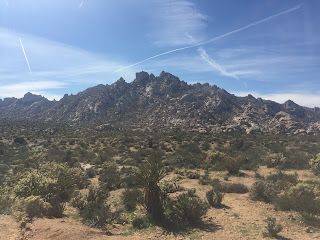 I look forward to the next CUE event, whether that be a Rock Star, Fall CUE, or if I can't go to another until next springs CUE National in Palm Springs.  In the meantime, I hope to share everything that I learned and learn from others that were there as well and apply it to my role as a dean of students.  Until next time...